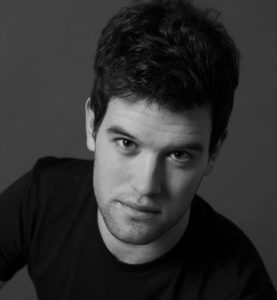 Bio: Conal graduated from the D.I.T Conservatory of Music and Drama with a B.A. Hons degree in Drama Performance. He spent eight months with the Emerald Isle Theatre Company touring two productions in France and Belgium. Upon his return he wrote and directed his debut play; The Break of Day in his hometown of Arklow. Other Credits include: Romeo and Juliet (The Samuel Beckett Theatre.) Cradle (Nominated for the P.P.I Best Radio Drama Award) Deathroom (I.A.D.T Graduate production.) Conal’s work with Barnstorm Theatre Company began as Christie Brady in the 1916 Commemorative play The Messenger written by Mike Kenny and Directed by Philip Hardy He is delighted to be reprising his role as Billy in Star Chasers in this tour.

Where are you from?
COS – I grew up in Arklow, Co. Wicklow. I was lucky enough to live close to a lot of beautiful forests and mountains; Billy would have a ball there! Now I live in Dublin, where the hustle and bustle of metropolitan life tries its best to interfere with the natural beauty of the world. I don’t let it, though. There’s always one star you can see – if you squint hard enough.

What was the first play you ever saw?
COS – The first play I remember seeing was Philadelphia, Here I come! I was about 10 years old and I fell in love with theatre from the off.

Was your English teacher inspiring?
COS – I was lucky to have a few excellent teachers growing up, particularly in primary school and college; the encouragement they gave definitely inspired my interest in English and Theatre.

Did you attend theatre while in primary school?
COS – Not so much in primary school. I was afraid to put myself out there. Thankfully, when I grew up I realised that it’s important to encourage yourself to ‘give it a go’, if it doesn’t work out and you don’t like it, well, at least then you’ll know from experience. So, to anybody who is thinking of getting involved in something like acting or football or anything, go for it!

Tell us about your character in Star Chasers:
COS – Billy is an eight-year-old boy and, like all eight-year-old boys, he knows best. He’s an adventurer with a thirst for discovery and storytelling. He’s bright and caring, and loves to play.

What will the audience be thinking about as they head home after the play?
COS – Hopefully they’ll be thinking “I’m glad Billy and Dad are moving forward together” and, “Wow, that was beautiful; I loved the story about Pavo.”

What’s going to surprise people about this play?
COS – I think the journey itself is the biggest surprise in the play.

What’s challenging about bringing this script to life?
COS – It’s such a beautiful and complex story, bringing the truth of that to life in forty minutes can be a very big challenge.

If you could choose ANY character to play, what would your dream role be on stage/film?
COS – Cúchulainn!! Though I reckon I could do with a few sessions in the gym first!

🌟 is going on nationwide tour from April 23rd to May 25th at various venues around the country beginning with Siamsa Tíre in Tralee. See Culturefox.ie for more details.