A Murder of Crows – 2011 Watergate, Kilkenny

By Mike Kenny, in collaboration with Barnstorm Theatre Company


‘…Barnstorm has achieved a combined strength through its small ensemble, reflected in the harmonies of their speech, the fluidity of their movement and their capacity to segue smoothly into doubling as both the crows and the human protaganists.  ‘A Murder of Crows’ is rooted in story-telling but it upends the form in a satifying manner. – Irish Theatre Review, 26 October 2011 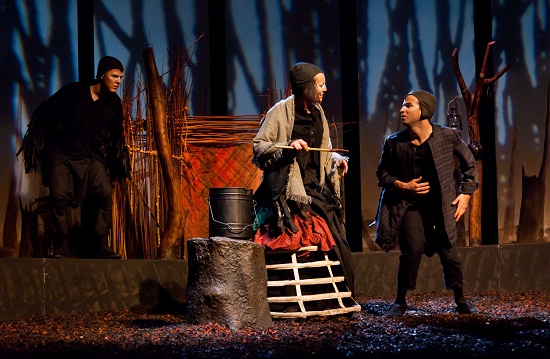 A Murder of Crows is a dynamic and theatrically exciting work for children aged 8 and over, based on the classic tale of Hansel and Gretel. The play explores themes of famine, family loyalties and personal growth.

Six actors weave a gothic story of two children’s journey from abandonment and fear to ultimate survival, seen from the quirky perspective of a chorus of raucous and garrulous crows, whose boisterous antics will delight children.

The production ran in the Watergate Theatre in Kilkenny from 11th – 19th October, and will tour nationally in the Spring of 2012.

This new script by Mike Kenny is being produced by Barnstorm in celebration of the company’s 20th year serving young audiences throughout the country.

A play for children aged 8 and older.