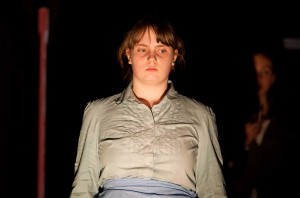 Following on from the incredible success of Burying Your Brother in the Pavement by Jack Thorne, Kilkenny Youth Theatre chose a tale of the gothic and the everyday: A Vampire Story.

Two young women arrive in a nameless British small town. Their names are not their own. They don’t declare their ages. Are they sisters as their assumed identities declare? Or are they mother and daughter? Are Ella and Claire vampires? Or are they troubled young women on the run?

Ella tells Frank she has qualms about killing people and frequently goes hungry. But her so-called sister has no conscience. Frank, also an outsider, thinks she’s delusional but fascinating. And while he tries to get to the bottom of her delusion, things start to fall apart, people start to disappear and her class mates begin to believe it could be true.

Written by multi-award winning playwright Moira Buffini (born in England to Irish parents), in 2011 A Vampire Story was in the process of being adapted for the big screen under the title Byzantium, with irish actress, Saoirse Ronan in the role of Ella.  In a recent interview with CultureNorthernIreland.org about A Vampire Story Moira says she writes plays for young people and wants them to be able to stage them with absolutely minimal resources. ‘All you need is a potato peeler,’ the playwright smirks. ‘A potato peeler and a pint of blood.’

And there was plenty of both when Kilkenny Youth Theatre performed Moira Buffini’s A Vampire Story to full houses from April 15th to Saturday 17th at The Barn, directed by Anna Galligan with a cast of eleven.