“For quite a few years now, Maeve Ingoldsby has been writing intelligent, unpatronising plays for children and her latest is as good as any of them…[Bananas in the bread Bin] is a smooth, well-obseved, good-humoured yarn of Everykid” – The Irish Times, February 9th, 1997 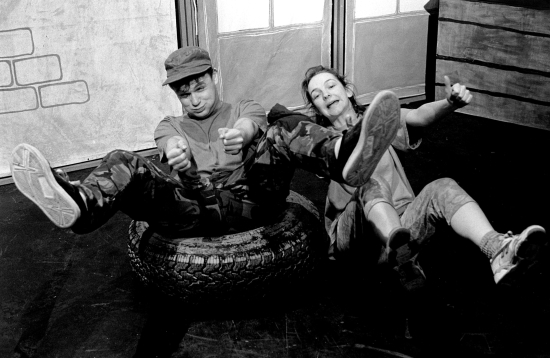 Emer is 8 and is grieving the death of the family pet. Aisling is 11 and feels that as the eldest she is blamed for everything. The sisters frequently squabble, but are they really fighting or engaged in a universal sibling ritual?

When their ‘brat’ of a cousin, Martin, is landed in on them for the day tensions increase. Martin’s parents have already split up. When Emer and Aisling’s parents are overheard arguing does this mean that they are also going to separate? What are they not telling the children? Later, when Martin runs away from home, hiding him in the garden becomes an exciting and sometimes hilarious adventure which draws the children together. But when small fibs lead to Big Lies the three children find themselves having to face consequences of their actions.

The play takes a light-hearted but insightful look at conflict and the role it plays in family life. Employing an energetic mix of humour, song and adventure story it explores the world of three children, their efforts at resolving personal clashes and their response to the conflicts that at times arise between parents.