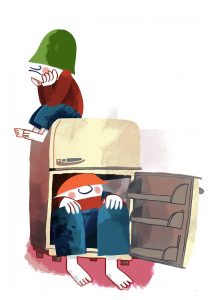 Poetic, humorous and rich in visual antics, this play explores friendship through a day in the life of two friends who have been likened to a modern-day Laurel and Hardy. For children aged 4+.

For more information go to: barnstorm.ie/north-america-tour

This tour is supported by Culture Ireland.

“…achieved that rather amazing goal of being able to make a small and limited world as big as the sky through inventiveness and imagination, something children have the capacity to do and adults too easily forget. Their fantastical car journey is a joy to behold!” – The Edinburgh Guide

“A touchingly humorous and thoughtful production that explores ways in which human beings overcome obstacles and difficulties in relationships with the people we care most about.” – The Bath and Wiltshire Parent

“…the production reflects and sanctifies children’s imaginative play, and the relationship between play and theatre for young audiences.” – Children’s Theatre Reviews.com

“Here is another brilliant, completely different, production which speaks to, and says as much about, married couples as four-year-olds.” – Children’s Theatre Reviews.com