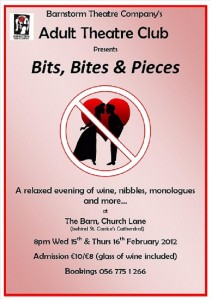 Following their debut, Shorts 11,  Barnstorm’s Adult Theatre Club continued to perfect their acting skills and began to tackle the role of ‘The Director’.  The fruits of their labour were seen at The Barn in February 2012 when Bits, Bites and Pieces hit the stage.

Now responsible for front of house and what happened on the stage the ATC transformed The Barn into the intimate setting of a cabaret club where patrons enjoyed wine and nibbles at café style tables while being entertained.  Happening during Valentine’s week, Bits, Bites and Pieces looked at love from all angles, and more so what happens after the usual ‘happy ever afters’ associated with romances.

Each group member chose a monologue or piece that they would like to perform.  They then teamed up with another member of the group who would like to direct that specific piece.  Each director then also became responsible for the set, costume, lighting and sound for the piece.  It was the perfect way to show case the wide range of talents the group had developed over its two years.

With all sorts of life and theatre experience between them, the members, who hail from all over Kilkenny and further afield, were Joe Nolan, Paul Derby, Ann Daly, Deirdre Dowling, Ann Jones, Tanya long, Cara Doherty, Caroline O’Hanrahan and Melissa Quirke.

The night included monologues, poetry and song.  Theatre pieces included were The Care and Feeding of Baby Birds by Ann Weuhler, Between daylight and Boonville by Matt Williams, The New Electric Ballroom by Enda Walsh, A Streetcar Named Desire by Tennessee Williams, Uncle Vanya by Anton Chekov, Molly Sweeny by Brian Friel, Shirley Valentine by Willy Russell, Art by Yasmina Reza, Molly Bloom by James Joyce  and two pieces from Brian Friel’s Dancing at Lughnasa.  There was also two original pieces written by group members: Lights in the Dark by Cara O’Doherty and Draft 1.0 by Ann Jones

At the time, Tanya Long, another member said ‘With the production night fast approaching the skills and experience gained in the last two years with the group are being put to good use’.

Bits, Bites and Pieces, a relaxing evening of wine, nibbles, monologues and more… happened in The Barn, Church Lane, Kilkenny on Wednesday 15 and Thursday 16 February.