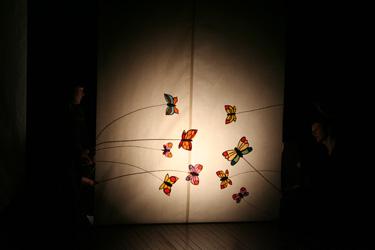 The objective of the Create a Story project was to engage with our audience and include their creative input in the creation of a piece of Children’s Theatre alongside Barnstorm’s company of actors, musician, playwright, designer, facilitator and director.

The project was initiated in 2009 in partnership with Poetry Ireland’s Writers-in-Schools Scheme which is one of the longest running arts-in-education programmes in the country, marking its 30th anniversary recently. But this was the first time it teamed up with Ireland’s leading children’s theatre company to devise and produce a piece of professional theatre. In times of economic uncertainty it is hands-on, proactive partnerships like this that will keep the art of theatre and storytelling alive for children.

In Spring 2009, two writers were engaged as Writers-in-Residence in the four schools to explore the art of writing and develop student’s individual skills. After a series of initial workshops the participating students (then in 4th and 5th class) were each asked to write their own story based on a specific theme agreed on by the writers, Barnstorm and the class teachers. The themes given were a Brother and Sister, Lost and Forest.

Barnstorm’s company of actors, musicians, playwright, dramaturg and director read the stories carefully and they proved to be a rich source of ideas.

Originally Barnstorm proposed to create a script from the children’s stories and to present a promenade production in a forest in Kilkenny in summer 2010. But with the cuts in funding to the arts in Ireland it was impractical to mount such a production.

LOST IN THE FOREST was the title given to the final phase of the project which involved a presentation of the script developed from the pupil’s work in the previous months.

For our presentation we did not pick any one of the 95 stories! Instead using the characters, ideas and events in the originals we created a ‘final story’ to form the basis of further exploration and devising.

For three weeks in April 2010 the actors worked with a designer, playwright, musician and director to devise a theatrical presentation based on this new story. In order to give the children a fuller insight into play-making, the company’s designer spent several sessions working with each school on theatre design and mask-work. The children’s ideas further informed the design of our presentation and each child’s work was displayed as the audience entered the theatre.

Lost in the Forest was the fruit of all of this work and was presented in The Barn on April 29th and 30th 2010 to the participating students and their teachers.

HERE’S THE TEAM WHO WERE INVOLVED IN CREATE A STORY…

Also: Paul Curley (actor) and Ben Samuels (actor/musician) who were involved in the early stages of the project.