When you’re seventeen every experience feels life changing – and then life goes on. 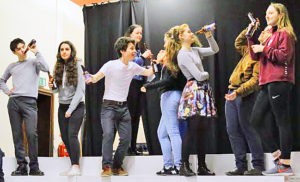 Taking a break from the classics, Barnstorm’s Kilkenny Youth Theatre presents their inaugural piece of devised theatre There is Only Now with a cast of 23 young people aged 13 to 18.

There is Only Now features characters that everyone will recognise from their own school days; whether that was last week or fifty years ago. The lingo might have changed and the styles may be different, but the people remain the same.

Asked about the devising experience, cast-member Leteisha (aged 14) said, “Devising for the production this year has been a unique and wonderful experience. I’ve learnt a lot about how a character’s actions influence how the audience perceives them.”

Speaking of her experience with this production, a fellow cast-member Gráinne (15) tells us, “It’s so easy to love every single character in this play. They’re easily identifiable with real people everyone has met in their life. Yet, they all have their own individual storylines that make them unique. I’ve really enjoyed watching the plot and the characters come to life.”

This will be Tom’s (aged 14) first production with the Senior Youth Theatre. He says “This show has been a lot of fun to make and act in. At the start of the show there’s a happy and joyful mood, but then it takes a more serious turn. The way Anna directed the show was very smart and I know that she put a lot of work into it. The other members were great so, my first year here has been fun and exciting!”

Anna Galligan, Barnstorm’s Outreach Officer and Director of the play said, “Devising is a terrifying process. You start with nothing but an idea and then you have to work as a group to get it to production. In this case, we started with the idea that, if we were to only listen to young people’s banter, we would think their lives very superficial, but there are whole lives being lived beneath the talk. I wondered if we could see if we could make a play that explored that.’

‘Then we decided to would use the story plot ‘a stranger comes to town’, and how that affects our play’s characters.  Though he does not set out to change lives, the stranger’s presence alone changes many lives in the play. The topics, story and characters are very much influenced by the members of the group and, terrifying as it was waiting for a play to emerge, once again the Youth Theatre members have outdone themselves in terms of commitment and ideas!”

Please note that the play contains some strong language and deals with topics of interest to 13-18 yr. olds.

For further information contact Anna Galligan at anna@barnstorm.ie or 056 7751266