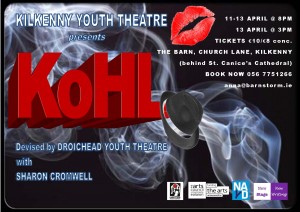 In their sixth production since restarting in 2007, KYT took on the genre of Film Noir in the guise of ‘KoHL’ – originally devised by Droichead Youth Theatre with Sharon Cromwell in 2008.

The Youth Theatre travelled back in time to New York during The Prohibition: gangsters, molls, illegal booze, a private eye with integrity and a newshound thirsty for a story.

Mia Swan, who has been looking desperately for her beloved sister, turns to Max Cole, a private investigator. She admits ‘I can’t say I’ve had the world’s greatest family background’ and fears for her sister’s life. The Prohibition has been in situ, to Leon Antonelli’s greatest advantage, for seven years.  He runs a ‘regular theatre’ with dancers and a show for his customers but Julia Stone, a fearless News Reporter, knows the real game. All she needs is evidence. As she goes undercover and Max seeks out Mia’s sister the story of this underworld unfolds.  Who knew what could happen in a dirty town?

The confines of the genre and the presence of stereotypes pushed the young actors in a new direction and also provided much laughter in rehearsals as the cast and director teetered between depth and superficiality.

With a cast of sixteen young people, KoHL performed to packed houses at The Barn on the 11th-13th of April and was directed by Anna Galligan.

KoHL was performed with the permission of the NAYD as part of their New Stage programme.  Kilkenny Youth Theatre is a proud member of NAYD. More info at www.nayd.ie.