MEET THE PLAYWRIGHT OF “BARNEY CAREY GETS HIS WINGS”

On stage at the Watergate Theatre from 21st to 24th of February is Barnstorm Theatre Company’s latest offering for age 7+ and their families, Barney Carey Gets His Wings . In our Meet the Creatives pieces you learn all about the experts involved in this new production, and today we meet the playwright, Brendan Murray. 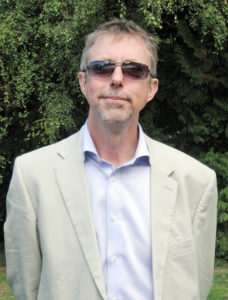 Where are you from?
BM – I grew up in Manchester in the north of England and now I live in Brighton in the south of England!

What was the first play you ever saw?
BM – The Pied Piper – I remember the actors came too close and scared me a bit! I was probably six years old.

Was your English teacher inspiring?
BM- My French teacher was, as was my history teacher!

Did you go to the theatre while in school?
BM – Not with the school but we did perform school plays

Who are your favourite playwrights?
BM – Anton Chekhov, Samuel Beckett, Shakespeare and Brian Friel.
Why did you begin to write?
BM – I wanted to communicate with people; make them laugh and cry and think and feel things. I wasn’t a good enough musician and my acting career wasn’t going very well so I switched to writing plays.

What does an ideal writing day look like for you?
BM – An early start, then writing all morning, followed by a bite of lunch (& maybe a quick snooze!) then more writing (and re-writing!) until early evening. Then I’m done so, I’ll have dinner and an early night. Of course, few turn out to be ideal writing days!

Tell us about the inspiration for writing Barney Carey Gets His Wings.
BM – Well… about fifteen years ago I met some children (they were about seven years old) in a school in New York and I asked them to draw pictures of what they wanted to be when they grew up. One of the boys, called Philip, loved dancing and he drew a picture of a ballerina. I kept all the pictures (and I still have them) and I used to wonder what happened to the children, and to Philip, in particular. A couple of years ago I discovered he had become a professional ballet dancer and that he was working for a company in which male dancers dress as ballerinas to make people laugh; his dream had come true! So, that was one inspiration. I was also thinking about why people don’t like those who are different from themselves. There have been times when I’ve found myself out of step with those around me and it can be frightening but I want to say: ‘It’s OK to be different!’

What sort of person is going to love the play?
BM – I hope everybody will; young people, grown-ups and especially any ladies with beards.

What will the audience be thinking about as they head home after Barney Carey?
BM-I hope they’ll be thinking they’ve had a good time; and that they’ll never again be afraid to be different.

What was challenging about writing this script?
BM-Keeping the story clear and making the characters sound believable. To be honest, the play almost wrote itself; for some reason these characters just wouldn’t shut up! So, I just hope that people enjoy seeing the play and that they will let us know what they thought about it.

School performances of Barney Carey Gets His Wings are on Wednesday 21st to Friday 23rd with a family show on Saturday 24th. You can buy your tickets from the Watergate Theatre (056 7761674) or online at watergatetheatre.com.