MEET THE CAST OF “BARNEY CAREY GETS HIS WINGS”

In our Meet the Cast articles,  you get to read about the people involved in this unique production. Today we meet Julie Sharkey who plays Agnes, the lady with the beard 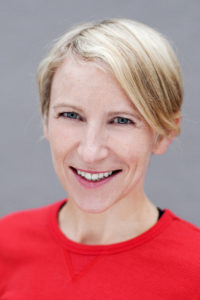 Where are you from? I’m from Ballaghaderreen, in County Roscommon, but now I live in Dublin

What was the first play you ever saw? It was Calamity Jane; I was nine years old and I thought it was the most exciting thing ever!

Have you performed in Kilkenny before? Yes – last year I was in The Secret Garden and in 2016, Remember to Breathe, both at the Watergate Theatre. Many moons ago – 1996 – 1999 I performed in several schools in and around Kilkenny with Graffiti Theatre Company.

Tell us about your character in Barney Carey Gets His Wings. I play Agnes, a mystical and otherworldly character who helps people find their magic again; and she has a beard!!!!

What sort of person is going to love the play? Everyone – young and old.

What will the audience be thinking about as they head home after the play? They will be thinking: “I’m going to embrace who I am and what makes me, Me!”

What’s going to surprise people about this play? That there’s a Barney Carey in all of us.

Who will have the best costume? That will be me – the bearded lady for sure!

What’s challenging about bringing this script to life? The challenge is to present the story with the right measure of magic and reality, so that the younger members of the audience can appreciate Barney finding his wings, as they wonder about their own wings. And the adults watching can appreciate Barney’s dad finding his wings, as they wonder to themselves: where did I leave mine?

Why did you want to be involved in this production? Firstly, because I think Barnstorm are an awesome theatre company. Secondly, because of this story; it’s magic and it’s for everyone. The events in the play affect Barney’s dad as much as they do Barney. And thirdly, because I’m very excited to get to know Kilkenny city better!

If you could choose ANY character to play, what would your dream role be on stage/film? I’d love to be in a big razzle-dazzle musical, playing a character like Roxy Hart in Chicago. I’m absolutely delighted to be working with Barnstorm; Kilkenny, here I come – I can’t wait!

School performances are on Wednesday 21st to Friday 23rd with a family show on Saturday 24th. Get your tickets from the Watergate Theatre (056 7761674) or online at watergatetheatre.com, and next month you can join Barney, his dad, and of course, the lady with the beard, as they spread their wings in this comic tale of forgotten memories and future possibilities.