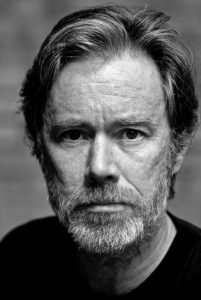 Biog: John trained at the Gaiety School of Acting in Dublin and has worked on stage and screen for over twenty years, in work as varied as Shakespeare, Glenroe and Game of Thrones.
He has also wrote, produced and directed for both theatre and film and has also travelled Ireland working as an acting teacher, facilitating classes for students of all ages.

Where are you from?
JD – Sutton in North Dublin and I’m living in Baldoyle, a stone’s throw from where I grew up and went to school.

What was the first play you ever saw?
JD – The first proper play I saw was Brian Friel’s Dancing at Lughnasa and it had a profound effect on me. I was working in The Gaiety Theatre at the time and I saw the show at least 40 times and applied for acting school shortly afterwards.

Was your English teacher inspiring?
JD – What I remember of my time in school is not that any one particular teacher was inspiring but that my whole experience of going to school was inspiring. I was very lucky in that the school I attended was situated right beside the beach in Sutton, so my school friends and I would go to school a whole hour early every morning to play football on the beach before classes. And at lunchtime and after school we’d play on the beach, too. The whole atmosphere at school was very good as a result. I think both our teachers and ourselves were inspired by our surroundings.

Did you attend theatre while in primary school?
JD – No, unfortunately I didn’t. That is the only complaint I have about my time in that school. I wish I could have as I know now what a wonderful opportunity it would have been to experience theatre at an earlier age.

Tell us about your character in Star Chasers:
JD- My character is a man with a good heart, and is generous and kind. He has suffered a great loss in his life but has chosen to move forward with purpose and positivity. And at the centre of everything he is and wants to be, is his son, Billy. I really like him and admire the effort he is putting into making Billy’s life as fulfilling and happy as it can be.

What sort of person is going to love the play?
JD – I hope anyone will love this play. I think anyone who has suffered their own loss will appreciate the story of this play, and even if someone hasn’t experienced the same kind of loss I’m sure they can be inspired by the journey these two characters go on.

What will the audience be thinking about as they head home after the play?
JD – They will be thinking about the wonder of the world we live in and the joy we can have from the simplest things, most of all from the love of our families.

What’s going to surprise people about this play?
JD – I think people might be surprised by our wonderful set and production design, but also by the strength and wisdom of the character of Billy.

What’s challenging about bringing this script to life?
JD – As with any script the challenge is to maintain the honesty and integrity of the script as you bring it to life. Scott’s script is wonderful and for Conall and I the hard work is making sure we allow Scott’s writing to shine and sometimes that means doing less rather than more. Luckily, we have a fantastic team behind us, and in Katy, we have a director who is brilliant at navigating that journey of the script from the pen of the writer to the mouths of the actors.

Why did you want to be involved in this production?
JD – I have always wanted to work with Phillip and Barnstorm – they do such vital and wonderful work! And I have always loved performing to younger audiences because they tend to be the most honest. They have no problem letting you know exactly how they feel both during and after a show, and that’s always refreshing.

What would your dream role be on stage/film?
JD – My dream role would be to play Jim Carrey, in anything, on stage or screen it doesn’t matter. I think he’s a fascinating character.

🌟 is going on nationwide tour from April 23rd to May 25th at various venues around the country beginning with Siamsa Tíre in Tralee. See Culturefox.ie for more details.