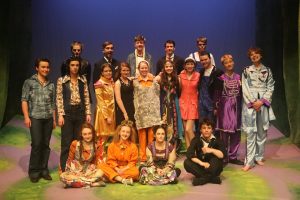 From the tragedy of Greek theatre the previous year to the comedy of Shakespeare, Barnstorm’s Kilkenny Youth Theatre presented ‘A Midsummer Night’s Dream’, returning to the fantasy and absurdity they executed so well in 2015, in Lewis Carrol’s ‘Alice in Wonderland’.

‘A Midsummer Night’s Dream’ follows four interweaving stories of love, jealousy and what happens when fairies play with the world of mortals. The Duke of Athens is trying to plan his wedding, four lovers have trouble figuring out who loves whom, an amateur theatre troupe tries to stage a play and the King and Queen of the Fairies, Oberon and Titania, are locked in a battle of wits, words and magical pranks.

Emily, a veteran member of the youth theatre, summed the play up as “Chaotic, joyous and dream-like.”

Sarah said of the play, “The youth theatre has always been a hub of new ideas, so putting a spin on a Midsummer Night’s Dream was no surprise. We’re all really excited to set it in 1967, because not only will we be able to explore the realms of Shakespeare from an angle that is seldom seen, we also have the opportunity to incorporate music, fashion and style from an iconic decade.”

Ferdia played one of the lovers, Demetrius, who he described as “a traditional headstrong egoist”. When asked what his experience with the play had taught him, he said “I have learned that people can change – especially if they’re drugged by a King of Fairies halfway through a play.”

Ciara, speaking of her four years as a member, said of the youth theatre, “Barnstorm has been a second home for me. A safe haven and a close family with whom I can be exactly who I am, or even, who I want to be”.

Anna Galligan, Barnstorm’s Outreach Officer and Director of the play said “Large cast plays are always a joy to work on.  The members are so committed to putting the work in to give any audience an amazing trip to the theatre. And Midsummer is such a riot of a play.  Our production is inspired by the Sixties and the Summer of Love particularly, so not only is love abounding but the costumes and music are all reminiscent of 1967.’

‘A Midsummer Night’s Dream’ ran from Thursday 27th to Saturday 29th of April  with a matinee on the Saturday at  The Barn, Church Lane, Kilkenny.