In early February, rehearsals will begin in The Barn for a new play for young children.

Star Chasers is written by Scott Young of OddManOut Theatre. The play is created especially for  children aged 4 – 7 and creating it included devising sessions in The Barn in May and November last year. Actors Paul Curley, Fiona McGeown, Ita Morrissey and Katy Weir were involved in the devising, along with Barnstorm’s Anna Galligan and Philip Hardy.

What is the play about?

A modern-day adventure for all, Star Chasers sees Billy and Dad heading north with just a tent and a box full of Mam’s memories. On the way they pitch their tent, conjure Mam’s stories and quarrel as they seek journey’s end and a new beginning.

Star Chasers is a rich exploration of the relationship between a parent and child and their attempts to come to terms with the shared loss in their lives. A tapestry of music, movement and magical imagery. 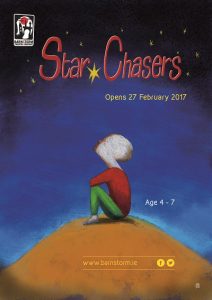 This is a world-premiere of a new play for children 4+ years, their teachers and families.