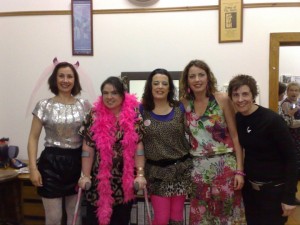 The Adult Theatre Club 2010-2012, made their debut in this year’s Shorts 11.  After eight months of workshops, training and rehearsals, they were ready to tread the boards.

Shorts 11 was performed by 12 members of ATC, who had been in training and developing their theatre skills since September 2010. With all sorts of life and theatre experience between them, the members, who hail from all over Kilkenny and further afield, were Joe Nolan, Helena Duggan, Paul Derby, Olive Whelan, Ann Daly, Olivia Boyce, Laura Cullen, Deirdre Dowling, Ann Jones, Tanya long, Cara Doherty and Caroline O’Hanrahan with Melissa Quirke as stage manager.

Shorts 11 consisted of four pieces, extracted from Stags and Hens by Willy Russell, Someone to Watch Over Me by Frank McGuinness, The Beauty Queen of Leenane by Martin McDonagh and The Factory Girls also by Frank McGuinness.  The pieces were directed by Barnstorm’s Artistic Director Philip Hardy, Barn Owl Player Trish Brennan and Barnstorm’s Outreach Officer Anna Galligan.

The performances, which were the groups first public foray, took place on the 14th and 16th of April at 8pm at The Barn.