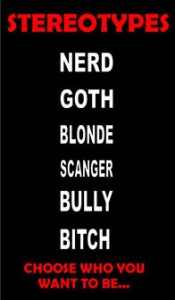 ….. an exciting and innovative outreach theatre project which was the result of a month’s intensive investigation, development and rehearsal with a group of local teenagers in 2007.

Outreach Officer Ronán MacRaois, worked with diverse groups in the city and county over a 6-month period, and through open workshop/auditions selected eight of them to develop a theatre performance based on teenage stereotypes.

Over a month the young actors created the original piece of theatre through a daily routine of drama/theatre workshops involving games and exercises, the development of performance & improvisational skills; and exploration of themselves, their own opinions and ideas.

“This is an opportunity for local young people to create new and refreshing theatre – we won’t just be putting this performance on a standard stage, we will be experimenting with public spaces and challenging people’s expectations” said Ronán. 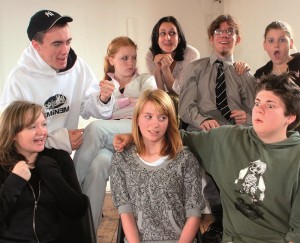 STEREOTYPES (a.k.a NERD GOTH BLONDE SCANGER BULLY BITCH) was performed on Aug 31st and Sept 1st in The Barn with a cast of eight.