The Adult Theatre Club (ATC) is a two year training programme that provides opportunities for adults in the region to explore, train and create theatre with a professional theatre company. 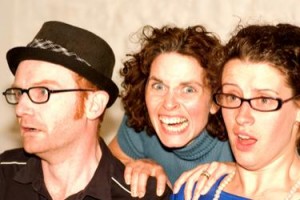 How can I join?

ATC takes on new members every two years, the next opportunity being September 2012.  You can let Barnstorm know of your interested at any time by contacting  056-7751266 or anna@barnstorm.ie.

All those interested are invited to an open information evening at the beginning of September, which allows them to sample a drama workshop and provides an opportunity to ask questions.  First term begins the following week.

Workshops run every Wednesday 7pm – 9 pm from September to May of both years.  Specialist training, presentations and productions require further time commitment which is arranged in advance.

Year one concentrates on acting and performance skills – in the latter half of the year the members research short plays or excerpts from plays to bring to the stage as a first public performance for the group.  These excerpts or ‘Shorts’ are directed by experienced directors, which in the past have included Barnstorm’s Artistic Director, Philip Hardy.

Year two sees the members continue acting, while developing  other skills  in Stage Management, Design, and Directing. Members will subsequently direct each other in monologues or script excerpts and these are presented in a unique production ‘Cabaret Nights’ to the general public in The Barn Theatre.

After this process the ATC group amalgamates with the Barn Owl Players, an innovative amateur theatre company, consisting of previously trained members of the ATC. BOP has a full and varied annual programme of training and productions in The Barn, the Watergate Theatre and other local venues.

How much is it?

The annual membership fee for ATC is €350. This includes a registration fee of €50 on acceptance of a place and then €100 per term.  There is flexibility within reason to how term fees are paid and there are a limited number of scholarships available.

In 2007, after much demand from the public Barnstorm, Kilkenny’s professional theatre company, decided to create opportunities for the adults in Kilkenny (& the southeast) to explore the art of theatre from acting, to stage management to design and more. The Adult Drama Club was initiated to be a place to socialise and learn about theatre, to go to shows and discuss the aspects of production afterwards in a fun yet critically positive environment. A second ADC group was formed in 2009 and members from both groups are now the Barn Owl Players with a growing reputation for exciting and innovative theatre projects in Kilkenny. BOP members continue their training while producing a number projects throughout the year.

In September 2010 a new group was formed as the Adult Theatre Club and later this year, after initial training and with a few projects under their belts, these members will become part of the Barn Owl Players.

The members of Barn Owl Players are constantly looking for new challenges in the development of theatre skills. In 2010 the first One-Act Theatre Festival was launched to tremendous success and in 2011 BOP presented its 2nd One-Act Festival, this time the pieces were directed, designed, stage managed and produced by the members.

2011 also saw the members devise and produce a unique evening of theatre in The Hole in the Wall on High Street for St Valentine’s weekend.

The Barn Owl Players are preparing a full-length production of Dancing at Lughnasa by Brian Friel for the Watergate Theatre 29-31 March 2012.

Cabaret Nights @ The Barn (2009)
Members directed each other in monologues that were presented in a ‘cabaret-style’ in The Barn – audiences were seated at individual tables surrounded by paintings and glitz, and, while performances took place on stages at either end of the room, were fed wine and titbits. (to back page)

Halloween Tales (2009)
Members of the Barn Owl Players created a show for children that involved Celtic Folklore and Legend based on Halloween and the horror tale. Children (and parents) were encouraged to bring along a duvet, blanket or pillow for this treat that was presented in The Barn on 31st Oct.

Christmas Crackers (2009)
The company re-visited the Cabaret Nights module to present a festive fare that thrilled audiences on the run-up to Christmas. This time mulled wine and mince pies added to the enjoyment of short performances, poems and songs to celebrate the season in The Barn.

Anything…But Peig (2010)
The second group of adults had been developing theatre skills over the previous year and presented their version of Cabaret Nights with an Irish flavour in celebration of St Patrick’s Day.

One-Act Festival (2010)
BOP produced the first festival which comprised of two programmes with five plays presented in The Barn over a week.

Christmas Crackers (2010)
Pieces were chosen and cast, directors elected and rehearsals well under way when the great snow of 2010 hit! We had to postpone and then cancel this one when January arrived.

Love Is… (2011)
But like true troopers the BOP rose to another challenge and in a short time created a memorable evening of Love with poetry, song and drama, for romantics & cynics alike, that was presented in The Hole in the Wall on High Street.

Shorts 11 (2011)
The new Adult Theatre Club took to the stage in the tradition of previous members and produced  four play excerpts in a full evening presentation in The Barn.

Cabaret Nights (2012)
Members direct each other in an evening of monologues, excerpts and poetry presented in The Barn in the unique setting of a club.