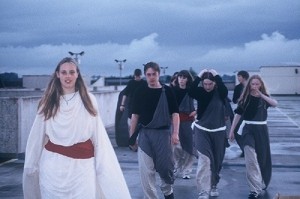 The Antigone Project was a 21st century re-working of Sophocles’ famous Greek Tragedy.  It was part of Barnstorm’s Bring it Home 2004 programme. This was a drama programme with Kilkenny teens, run by two former Barnstorm members, who were studying drama at college.

This particular project culminated in three sell-out performances of The Antigone Project at Ormonde Multi-Storey car park during KAF.)

The aim of Bring it Home was to encourage and nurture the skills and talents of young Kilkenny people who had worked with Barnstorm in the past and to encourage those who were now pursuing a career in theatre production to share their skills with others in Kilkenny.  The programme was led by local Kilkenny people Medb Lambert and Liz Fitzgerald. Medb and Liz were both studying drama at Trinity College at the time.

Medb is from Kells, and is one of the Lambert family, well-known throughout the country for the Lambert National Puppet Theatre.  She had written a number of plays – Catch a Butterfly, Counting Chickens, Mahogany Birds – and adapted Sophocles’ original Antigone for this project.

Liz hailed from Watergate and was formerly an actor and a stage manager with Barnstorm.  She had been involved in theatre for many years.

Having met in college, Liz and Medb decided they would like to create more opportunities for young people in Kilkenny to get involved in theatre.

In July 2004 twelve young people answered the call to take part in a summer programme of drama/theatre workshops and rehearsals, with the aim of creating an exciting play to be performed in unusual and unconventional space during the Kilkenny Arts Festival.  Using Medb and Liz’s skills of theatre, adaptation and multimedia and the groups own talents in the areas of video, costume and graphic design, the group created a piece to be performed in Ormonde Street Car Park.  The car park location echoed Greek theatre’s traditional performance space, the amphitheatre.

The Antigone Project was performed from 10th – 12th of August with a cast of twelve young people.