In February 1996 Barnstorm embarked on a 16-month project with playwright Ken Bourke and the people of Castlecomer to devise and present a community play which would be unique to that community, reflective of its rich history and its people.

The Comer Story written by Ken Bourke, in collaboration with the people of Castlecomer, was presented in the Castlecomer Community Hall, and represented a major achievement for the company in its aim to provide wider access to theatre within local communities, and marked a first for the company and the county.

The Comer Story was presented in the Castlecomer Community Hall (1997) and subsequently in the Watergate Theatre, Kilkenny (1998). 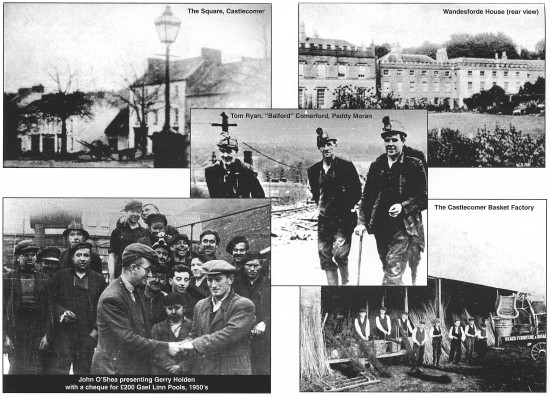 “…Before, when people used to ask me where I lived, I used to explain ‘Comer by saying “it’s a little town fourteen miles from Kilkenny”, but now when poeple ask me I take pride in telling them all about ‘Comer, past and present….”

“…They say laughter is ‘the best medicine’! We certainly did laugh – old friendships were strengthened, new friendships begun, never to be forgotten….”

“… I didn’t have a lot of confidence in myself but as the weeks and months went by I started to enjoy and let myself go. Still, at that time, I swore that I would never go on stage, except to help backstage. But here I am with only two weeks to go and I am really looking forward to the challenge….”

“… Friendships were formed with new people and also with people you already knew but had very little contact with before the play. Hopefully all these friendships will continue long after the play has finished….”

“… At our Christmas party night in the Springhill Hotel, our table was labelled The Castlecomer Community Play Group. There was a lot of truth in the title. We are all adults with inhibitions, but in this group we were allowed to become children playing freely and having genuine fun….”

“… Although I knew snippets of the history of Castlecomer from my schooldays The ‘Comer Story has instilled a certain pride in me in being a Castlecomer woman, which I already had but which has now become deep-rooted and alive….”

“… I was always passing through, knowing very few people and very little about the area. I went along to the introductory meeting on my own and I was hooked!… It wasn’t the usual core group, but something new and exciting; and everyone felt immediately part of. … I thank Barnstorm for their huge initiative and enthusiasm. Each of us was treated equally and gently pushed! Thanks for giving me the chance to make new friends in my new home….”

“… As my father once trod the boards in the old Parochial Hall in Castlecomer in many pantomimes with the Deenside Players and as a member of the Castlecomer Male Voice Choir , it is with great pride and a certian melancholy that I carry on this family tradition in The ‘Comer Story. I value and appreciate the experience….”

in collaboration with the community of Castlecomer