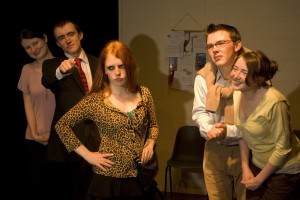 Kilkenny Youth Theatre (KYT) was re-launched in September 2007, providing a vibrant programme of theatre workshops and activities to 13—18 year olds on a weekly basis.

The Exam was KYT’s first annual performance of its return.  The production was specifically chosen for both its great comic writing and relevant themes that reflect young people’s lives. This was in keeping with KYT’s policy of “theatre for young people and by young people”.

The Exam followed three sixteen year olds battling through the ordeal of a high-pressure exam: Bea, nicknamed “Two-Brains”,  imprisoned by other people’s expectations of her cleverness; Chas, a popular and chaotic underachiever, who invents his own slang; Andrew, a frenetic worrier, who is starts to think and talk like a middle-aged man and has an ulcer to prove it! They must come to terms with themselves, their peers and parents. They were joined onstage by worryingly well written examples of disastrous parenthood, some seriously self-obsessed teaching staff and “Ex”, the disembodied voice of the exam!

The Exam was written by the award winning author Andy Hamiliton – the genius behind British TV comedies “Not the Nine O’ Clock News” and “Drop the Dead Donkey”.

Directed by Ronan MacRaois with a cast of 12 (and one cat!), The Exam ran for four performances from 22nd – 24th May at The Barn.