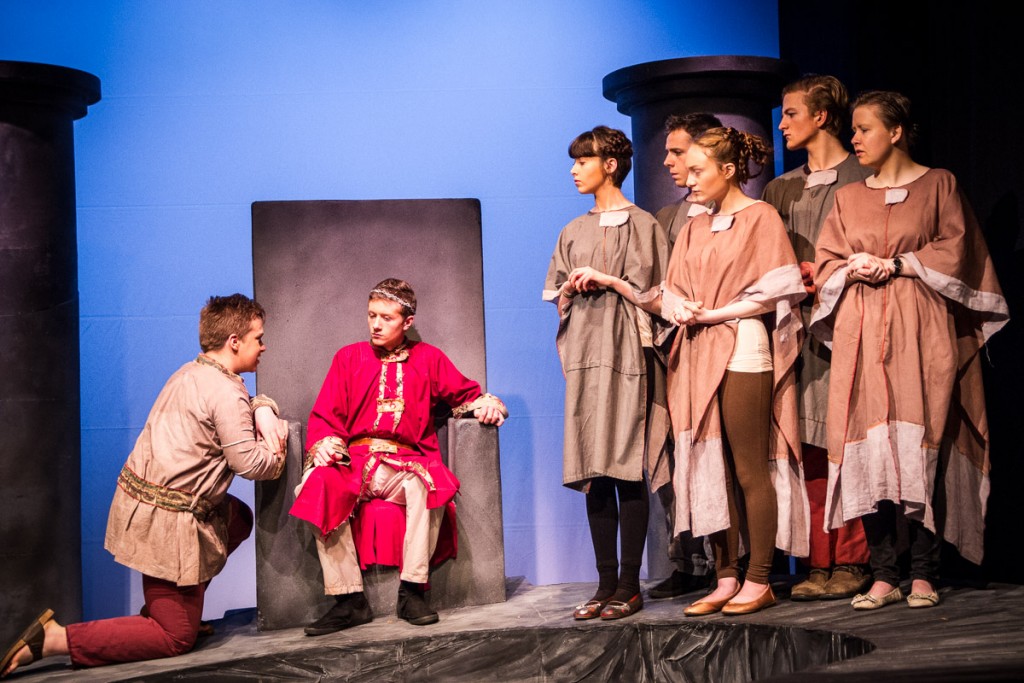 If a person commits a crime but does not know it is a crime, are they guilty?

Barnstorm’s Kilkenny Youth Theatre presented an epic tale of Greek tragedy, ‘The House of Oedipus’, a story of one man’s family doomed from the beginning.  Following on from the success of the ultimate tale of star-crossed lovers, William Shakespeare’s ‘Romeo and Juliet’ and Alice’s absurd journey into Wonderland, Kilkenny Youth Theatre took on the world of gods and men.

‘The House of Oedipus’ had a cast of 18 young Kilkenny people who presented this tale of Oedipus,  a man who kills his father and marries his mother with dire consequences.  It was adapted by Anna Galligan from four Greek tragedies, ‘Oedipus Rex’, ‘Oedipus at Colonus’ and ‘Antigone’ by Sophocles and ‘Seven at Thebes’ by Euripides.   Following a workshop programme designed to introduce theatrical elements of Greek chorus work, it was a challenge that the group were ready for.

Brian O’Hanrahan, who played Oedipus, said, “Playing the role of Oedipus was both a new and familiar experience for me.  Having played a leading role previously, I had some idea of what to expect, though Oedipus’s interesting character progression was a fresh and enjoyable challenge.”

David Collison playing Eteocles, Oedipus’ son. He said “being part of the Greek Chorus was a new experience for me and the prospect of my fellow actors and I working as one was both challenging and entertaining.”

Anna Galligan, Barnstorm’s Outreach Officer and Director of the play said “Last year we looked at a play of a small world, where everything took play inside one character’s head.  This year it’s the exact opposite, three generations of family, two countries, murders, war, and one of the great law questions – if you do not know you were committing a crime when you committed it, are you guilty? The Greeks didn’t do ‘small’!’

‘The House of Oedipus’ ran from Thursday 7th – Saturday 9th April, with a matinee on 9th April, at The Barn, Church Lane, Kilkenny.