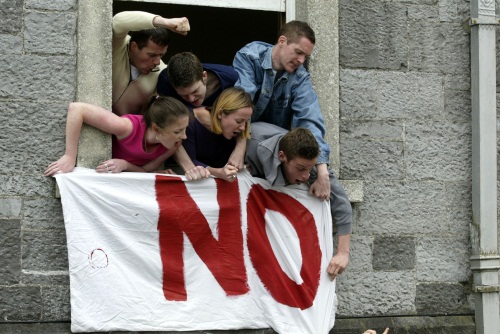 Six Leaving Certificate students decide to protest against the most important exam of their lives in the best way they know how, by not showing up. They are going to make the stand for all students past, present and future.

It is no accident that they choose to base their protest in their town’s heritage centre and in the very room where Joe Holland lived- a patriot who died on hunger strike to achieve his aim of Ireland’s freedom.  They too are willing to make their sacrifice. Without an English grade they will not be able to go on to further education, will not be able to pass into the adult world beyond The Leaving.

The play is about commitment.  Each of the six declares belief in the importance of the protest, but is it also possible that they are spurred by other, more personal reasons? Is success any less likely if the reason for doing something is other than the stated one? Could Holland himself just have been frightened about being a nobody? The six have a lot to endure and work out on the eve of The Leaving.

A play for teenagers.