Transition Year Student Working on The Plough and the Stars 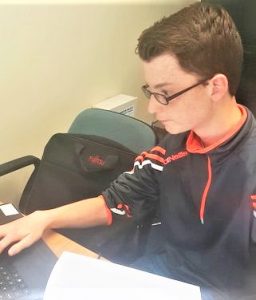 lor, a Transition-year student in Borris Vocational School, Co. Carlow who is currently on work experience at the Watergate Theatre.

Ger Cody explains: ‘For the last number of years, the Watergate Theatre has worked with various secondary schools in County Kilkenny in facilitating their students on work experience. The students work for between one and nine weeks to see what it is like working in a professional environment. Since the beginning of September Cormac Lalor has taken on such a role. A Transition-year student from Borris Vocational School in Carlow, Conor hoped to find work experience in areas of film or theatre production. He chose the Watergate Theatre as one of his placements for the year and seems to be enjoying the work so far.

‘I get to explore the managing, advertising and technical side of a theatre production, and I also help with preparations for the theatre’s upcoming events,’ Cormac told us. ‘The staff are all very friendly and helpful and the atmosphere is relaxed. The first task I was given was to research the Irish playwright Seán O’Casey and his play The Plough and the Stars, which will be performed here from next month, and below are my findings.’

O’Casey is a very interesting character, with a unique and beloved body of work which largely focuses on Ireland’s move toward Independence, and in particular, on the impact that these social shifts had on Dublin’s working classes.  He was an Irish dramatist and memoirist, and as a committed socialist, he was the first major Irish playwright to write about the Dublin working classes. When O’Casey was just six years of age, his father died, leaving behind him a family of thirteen. The family lived a nomadic life after that, and at the age of just fourteen, O’Casey left school and worked a variety of jobs. Throughout this period, he also honed his skills as a creative and explored his literary and dramatic interests.

From the early 1890s, O’Casey and his elder brother, Archie, began performing their own plays in the family home. Seán was given his first role in Dion Boucicault’s The Shaughraun in the Mechanics’ Theatre, the site where The Abbey Theatre now stands; an omen, perhaps, of successes to come.

Alongside these flourishing creative instincts, O’Casey was growing into a socially astute, politically engaged young man. In 1906, O’Casey joined the Gaelic League and began learning the Irish language, Gaelicising his name from John Casey to Seán Ó Cathasaigh. He then joined the Irish Republican Brotherhood and became involved in Jim Larkin’s Irish Transport and General Workers Union. In March of 1914, he became the General Secretary of Larkin’s Irish Citizen Army, which was soon to be taken over by James Connolly. On 24 July 1914, O’Casey resigned from the ICA after his proposal to deny dual membership to both the ICA and the Irish Volunteers was rejected.

He was inspired to take his writing seriously when his friend, Thomas Ashe, died on hunger strike in 1917. He spent the next five years writing plays, his first accepted work, The Shadow of a Gunman, was performed at the Abbey Theatre in 1923. It was followed the next year by Juno and the Paycock, and The Plough and the Stars in 1926. His plays are on a variety of themes including Irish patriotism, tenement life, self-deception, and survival.

Today, O’Casey’s plays are studied and performed internationally. Thanks to his unique and insightful portrayals of working class life in Dublin, his dramatic works now play a central role in the modern Irish literary canon, and his works are among the very best to have come out of 20th century Ireland.

Cormac added that ‘learning about the author will certainly add to my enjoyment of the show – I hope it will for the reader, too.’