UK Tour of The Bockety World of Henry & Bucket! 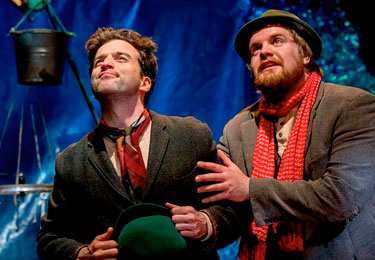 Barnstorm is delighted that Culture Ireland has awarded support to Barnstorm for a UK tour for its lauded two-hander The Bockety World of Henry & Bucket. First the invitation came from Imaginate Festival in Edinburgh to bring the play to this international theatre festival, and it soon grew into a wider UK tour of the play.

Described as ‘Beckett for children’ The Bockety World of Henry & Bucket is an entertaining, thought-provoking exploration of friendship for young children. Children delight in the humour and the visual antics of the two friends, Henry and Bucket, as they negotiate their friendship over the course of the 45-minute play.

While Barnstorm has been involved in the international TYA (Theatre for Young Audiences) festival circuit for many years, this will be its first time bringing a play to Imaginate, the foremost international festival of performing arts for children in the English language.

Artistic Director Philip Hardy says, ‘I have been a regular visitor to Imaginate Festival over the years, seeing some amazing theatre from around the world, which has influenced my own practice, so I am delighted to see Barnstorm on its 2015 programme.’

The Bockety World of Henry & Bucket UK tour includes a 5-day run in June at the celebrated Polka Theatre in London. The Polka is a world-renowned theatre, one of only a few theatre venues dedicated to producing and presenting work for children.

The play’s director Sarah Argent says, ‘I am based in the UK and have presented work at Polka many times, with shows from England and Wales. But this is my first time visiting Polka with an Irish production.’